We recognize the importance of keeping abreast of what’s been happening around the world, especially at this time when several situations directly impact the logistics and Transportation industry.

The purpose of our market brief is to keep our customers informed through indicators, trends and valuable market data that will help you make better decisions regarding your logistics operation and will be useful to withstand situations that are not within our control. Don’t miss all the timely information we have for you.

Supply chain disruptions seem to be sticking around longer than we would like them to. Covid lockdowns in China are creating shipping clogs at the ports and this is causing the hair ball to be even more tangled. Click the video to know the main reasons why Covid lockdowns are impacting the supply chain.

According to DAT, for march’s last week, more truckload capacity became available, resulting in another week of reductions in van and reefer spot rates. Despite recent decreases in late winter/early spring, rates are still significantly higher than they were a year ago at this time.

The National Load-to-Truck Ratio, which measures the balance between spot market demand and capacity followed a trend of easing conditions especially for Van and Reefer services. Normal seasonality throughout the year would indicate a continuation of more favorable settings. However, recent fuel trends suggest that we could see a divergence from usual seasonal trends to the downside.

According to Freightwaves SONAR, the Outbound Tender Volume Index (OTVI), which measures the volume of loads offered by shippers to trucking companies on a given day, dropped to lowest non-holiday point since February of 2021 mainly because of higher compliance on higher contract rates, due to inflation. Though it is not a complete collapse, it is a significant slowdown of 10% YoY from the majority of 2021, but accepted volumes are 2.5% higher.

As seen in the graphic below, the Outbound Tender Rejection Index (OTRI) is defined as the percentage of loads rejected compared to the total loads offered by shippers under contract terms rates

The rejection rate has been declining since early March, falling from 18.7%, to 16.1%. Again, this could be driven by the rise in inflation as it is directly impacting the consumers purchasing power. Everything is much more expensive, food, gasoline, among others. Which causes people not to buy that many goods as they were doing. For this reason, the impact on truckload demand if inflation continues to rise, is evident. Consumer spending power will result in lower consumer demand and, as a result, lower truckload demand, meaning there could be an easing in tight capacity.

Chinese lockdowns because of the spread of COVID-19 are causing further chaos for the supply chain.

At least 180 container vessels are still stuck outside Shanghai, Ningbo, the city’s main port. Warehouses are extremely log-jammed too, as a consequence of strict testing protocols imposed after the virus outbreak. This has had knock-on repercussions for US ports, which have been affected by extended delivery delays, escalated shipping costs, and extremely long lines of container ships waiting to unload amid the worst congestion on record.

According to supply chain experts, if the health crisis pushed supply chains to their breaking point as it sparked an extraordinary surge on consumer demand, the increasing conflict between Russia and Ukraine, as well as China’s zero-tolerance rules and ongoing lockdowns, are threatening to break it completely.

In 2021 the industry was dealing with a massive capacity shortage as there weren’t enough drivers and trucks available for dispatch to match all the freight in the market. For March and the following months, the situation will be different as there will be too many trucks ready to move compared to the amount of freight available. According to market data, we appear to be on the verge of a capacity glut.

“Inflation is not likely to roll over and begin to come down for several more months” (Rockeman, 2022).

According to economists, whereas February was predicted to be the high for US inflation, this month trends show that it will rise to above 8%. This is a consequence of the Ukraine conflict and Biden’s restriction on Russian energy imports that caused oil supplies to be tightened, causing retail gasoline and other commodity prices in the United States to hit new highs in March. 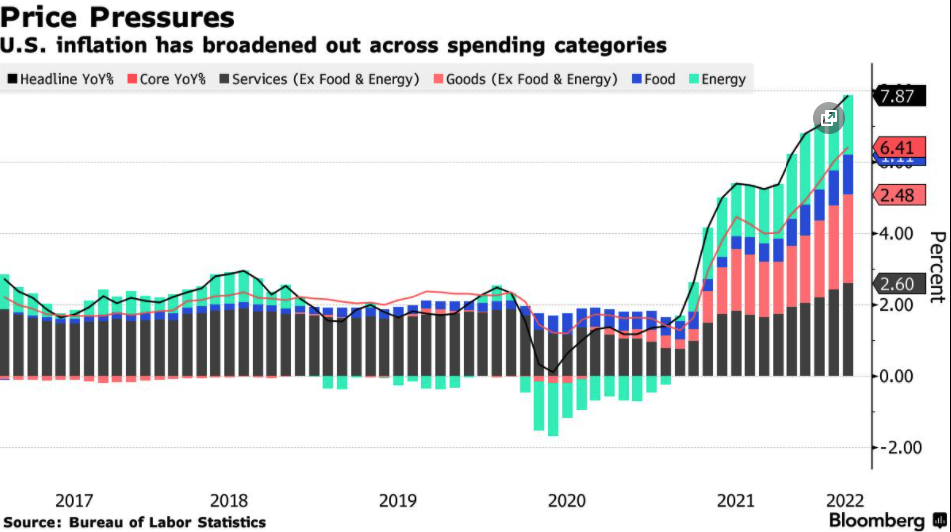 In the graphic above you can see that product prices continue to rise and annual growth in services costs increased 4.8% from 2021. Goods inflation increased by 13% year over year, the highest rate since 1980.

AAA Gas Prices say that the average price for a gallon of regular fuel across the United States is $4.2, the higher it has been in eight years mainly because of inflation and the war in Ukraine.

The government has plans to release up to 1 million barrels of oil per day from the strategic reserve in an effort to keep rising gasoline costs and inflation under control.
Joe Biden announced the decision, claiming it would be the largest -ever draw on the country’s emergency stockpiles.

For the supply chain, it’s been a tough year and all of its disruptions are impacting the entire logistics industry as well as the final customer.

However, we are seeing more and more efforts to mitigate the crisis. Companies, governments, and countries have been consistent in innovating and finding new ways to operate despite the challenges.

We cannot give up, on the contrary, we need to work even harder and unite to get out of this situation with a much stronger market.